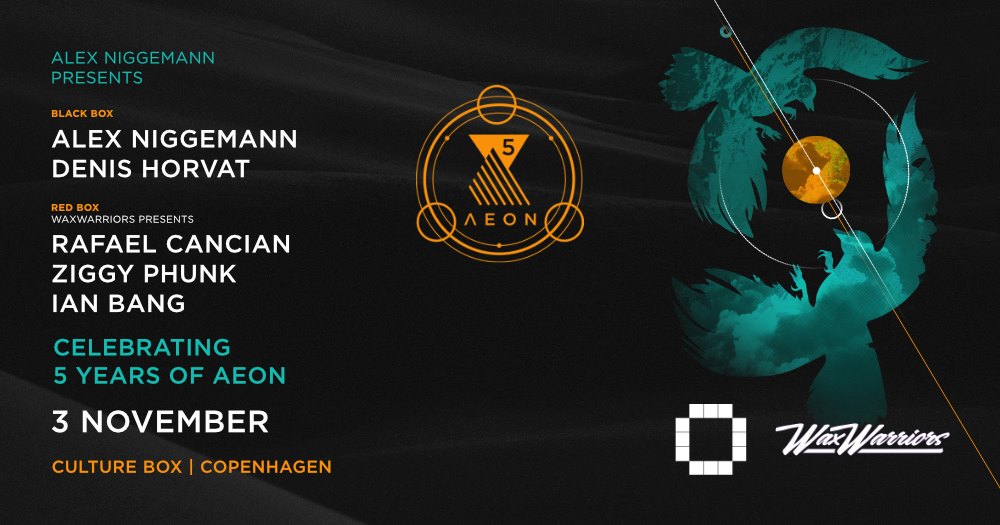 We are celebrating 5 years of Aeon.

DJ, producer and label boss Alex Niggemann is based in Berlin. His ever-restless creativity and desire to build a platform for music that defines the deeper side of the electronic spectrum, led Alex to launch his very successful label, AEON in 2013. His aim for the label is to build a representative artistic platform that mirrors the peak time DJ sets that he plays, referencing the spirit of classic, timeless house and techno and updating it for the future.

Alex is joined by Denis Horvat in Black Box. With releases on AEON as well as Innervisions, Afterlife and Diynamic, he has already made some stellar achievements as a DJ/producer and it’s clear the Dane has a bright future ahead of him. Although considering himself a producer first, Denis Horvat has fast established himself as a DJ and now regularly shares the bill with the likes of Âme, Dixon and Maceo Plex to name a few.

WaxWarriors presents the lineup in Red Box with Rafael Cancian from About Disco Records taking the trip all the way from Brazil as well as Ziggy Phunk known for his quality releases on Peppermint Jam and Midnight Riot among others. They team up with Copenhagen whirlwind Ian Bang. Ian Bang is behind more radio shows that you would ever imagine and a cornerstone of both CPH Deep and the crew behind IG60.

We have arranged unlimited free Tuborg Gold for those of you arriving before midnight so please come down early.