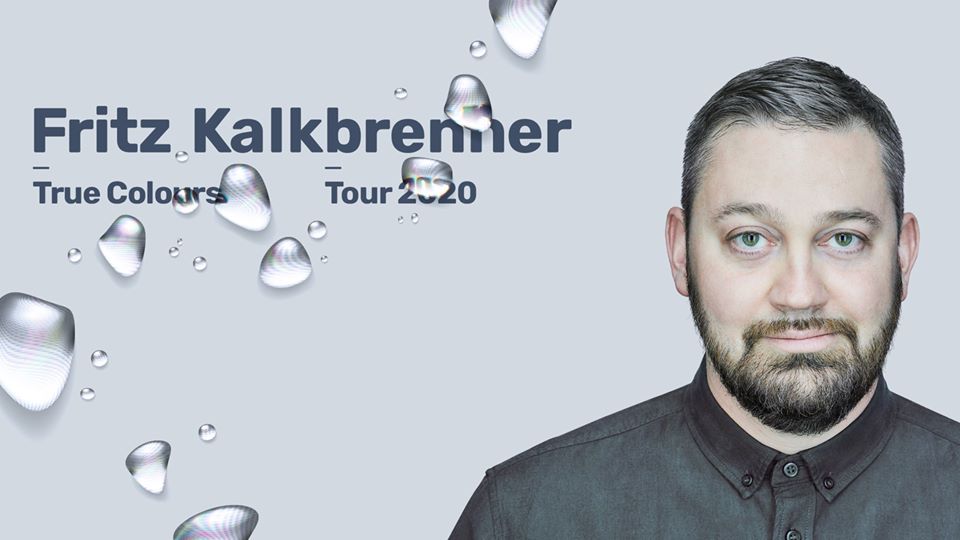 Last time you saw him was at the sold out show at Pumpehuset last year when he delivered a fantastic DJ set. Now, Fritz Kalkbrenner returns to Copenhagen with a brand new album on his True Colors Tour and will give you a epic live performans at Store Vega.

Fritz Kalkbrenner – Basic Infos Born in East Berlin 1981 Fritz Kalkbrenner was heavily impressed by the mid 90ies Berlin Techno scene following his older brother Paul who just made his first steps in that modern world of electronic music. After working on various film- and TV related agencies Fritz showed up behind a microphone in 2003 to contribute vocals to „Forms & Shapes” by his friend Sascha Funke. From the release of that vinyl 12inch (with a great Paul Kalkbrenner Remix) the artist career of Fritz Kalkbrenner was on its way.

His next vocal contribution happened by accident when his brother Paul was composing the soundtrack for an underground film project called „Berlin Calling” which became a cinematic milestone for techno music. Discovered on some old DAT tapes a random
demo vocal of Fritz ended up on Paul Kalkbrenner’s computer and within a few days in 2008 „Sky & Sand” was created and became a worldwide anthem.

On the back of these experiences Fritz started making his own music and joined the Berlin based record label SUOL in 2010 with the intention to create his blend of soulful and deep electronic house music. After a couple of 12inchs his debut album „Here Today
Gone Tomorrow” was released the same year and got him great feedback from media and fans highlighting tunes like „Facing the Sun” or „Kings in Exile”. His formula of using his own unique voice for his interpretation of house music was very well received by
many people at clubs or doing homelistening. At the same time Fritz started doing live gigs in clubs all over Germany and other close European countries.

With critically acclaimed remixes by Henrik Schwarz or Booka Shade he went further on in his career delivering his second album „Sick Travellin’” in 2012 with the help of his coproducers and SUOL label owners Chopstick & Johnjon. With him singing on „Get a Life”
and „Little by Little” Fritz Kalkbrenner created singles which made their way to German radio and opened another door for him.

It took him another two years to enter the German album Top 10 with his next studio album „Ways over Water” and his big single success „Back Home” which got played thousands of times on German radio and reached the German Top 20 single charts. With
Fritz constantly touring and playing clubs and the biggest festivals he became a household name on the European electronic music scene presenting his music at big festivals.

He came back to Berlin after many live shows with lots of musical ideas and went straight to the studio to work on new music which showed up officially at the end of 2016 under the name „Grand Départ”. Again, released on SUOL his fourth studio album scored a Top 10 position in the German album charts and manifested his position in the top league of German electronic music artists.

After doing impressive TV live broadcasts for ARTE and the impressive „Cercle” live show in front of the French chateau „Domaine de Chantilly” Fritz Kalkbrenner felt a need for a new musical direction. He headed back to strictly instrumental underground House music which led to the epic „Drown” album which got released in 2018 on „Different Spring” a SUOL Sublabel. „Drown” gave Fritz a new creative freedom to work again with lots of hardware like oldschool drum machines and made him re-discover his own roots planted on dancefloors somewhere in east Berlin.

Being his 5th studio album „Drown” led to a next level for Fritz Kalkbrenner with him starting his own label imprint „Nasua Music”. For his new label Fritz Kalkbrenner started producing new music in 2019 with a new crew of people. The new single „Kings & Queens” was released in October 2019 with Fritz doing a great reality song with an organic analog feel within the catchy production. „Kings & Queens” and it’s follow up singles will lead to a new artist album called „True Colours” to be released in March 2020.

We reserve the right to make any changes.
18 years at pre-sale