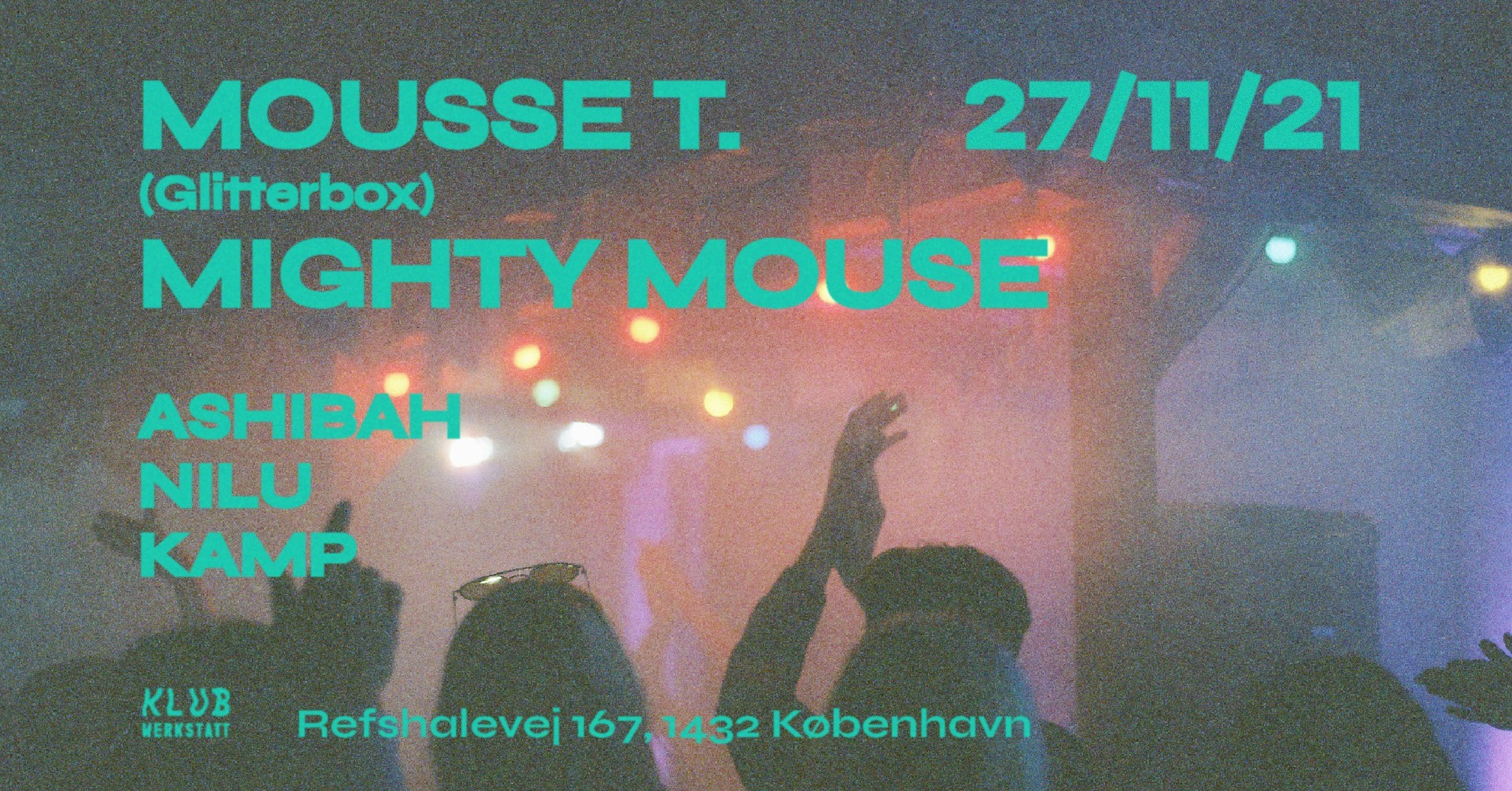 MOUSSE T. + MIGHTY MOUSE + ASHIBAH + NILU + KAMP A night of disco, dancing and a lot of glitter! Get

MOUSSE T. + MIGHTY MOUSE + ASHIBAH + NILU + KAMP
A night of disco, dancing and a lot of glitter!
Get ready to dance, sweat and party with the award-winning and legendary Glitterbox DJs, Mousse T and Mighty Mouse.
GET YOUR TICKETS HERE: https://bit.ly/2YulbTg
Werkstatt will be filled to the brim with amazing tunes and loads of sexyness and disco-balls.
The party starts early, for your pleasure only…
Early Early Bird: 100 DKK (sold out)
Early Bird: 120 DKK (sold out)
Pre-sale: 150 DKK
Doors open at 18:00
* valid coronapas is required*
TABLE RESERVATION: event@werkstatt167.dk
Everyone is welcome at Werkstatt <33 We do not tolerate any type of discrimination.
Mousse T. is one of Germany’s most prominent musical exports. With MAJOR 90’s hits such as “Horny” and Tom Jones’ “Sex bomb”, he has become a household name and been dominating the charts for decades. The success of “Horny” and “Sex Bomb” was followed by an Ivor-Novello Award, Grammy Award nomination and three studio albums.
With no sign of slowing down, Mousse T. continues to produces and fill dance floors all across the globe. Currently he is residing on the Glitterbox roster, playing gigs af Hï Ibiza, Viper Room Los Angeles, Pacha and Loveparade (to mention a few!)
www.soundcloud.com/mousset
Since the late noughties Mighty Mouse has been carving out his own path making innovative disco and house music whilst cementing his reputation as a truly international DJ. 2019 was his breakout year following the release of his critically acclaimed anthem, ‘The Spirit’, released on Defected’s Glitterbox imprint. 2019 also saw a resurgence of his track ‘Midnight Mouse’ (largely due to the infamous Folamour Boiler Room moment – now with over 1 million views).
https://soundcloud.com/mightymouse-1
ASHIBAH
https://soundcloud.com/ashibah
KAMP
https://soundcloud.com/mathiaskamp
NILU
https://soundcloud.com/niludk