You have to imagine it – talking to Super Foreskin Leather Uniform

The red leather couch is a lot more aesthetically pleasing than comfortable. I find myself at Murdoch’s Books & Ale in Phoenix Hotel. Located in a part of Copenhagen where I fit in like a drag queen at Kremlin. Luckily mind and butt comfort is the furthest thing from my thoughts since I am here to talk to Feliks Thielemann and Mathias Schwarz – better known to the dance floors as Super Flu. The duo hits Copenhagen for a gig at Culture Box and was kind enough to sit down with me.

– Are you ready to become famous?, says Mathias and looks at me with a crooked smile.

Before I can get my respond together he is out of his beautiful lounge chair, asking the woman at the next table to assist with a picture for Insta-stories. An account he is running himself.

After the nice middle aged woman had digitally perpetuated us, she wanted to know how the three of us knew each other.

– We actually don’t. We just met and wanted this moment to last forever, says Feliks without flinching.

After spending only minutes with Feliks and Mathias I can’t help but think; they might be colleagues, but first and foremost they are fun loving friends. A friendship that started 15 years ago in their hometown Halle/Saale. Drawn together by faith and a common love for electronic music they teamed up and the rest is history. An 11 year old history if we are to talk about their fabled label, Monaberry. 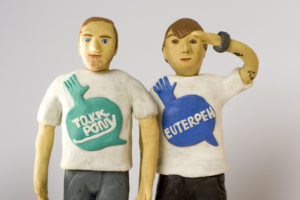 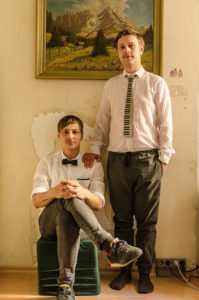 If you have ever heard a set from Super Flu, you know this to be true. It’s not really like any other music out their. Feliks and Mathias have carved out a their own little section of electronic music scene with an easily recognizable super sound. I wonder what has been some of the highlights for Monaberry?

– It has been some amazing years and we have come a long way since we started, but I’m not sure that I wanna talk about highlights. It’s an ongoing journey where we and our sound develop into new directions. For example, when we played Fusion years back we were playing Turmbühne, that has a techno attitude. Last year we played Panne Eichel, which has a way more deep expression, says Mathias and is immediately backed up by Feliks.

– Monabarry came to be because we wanted our own playground, where we set the rules. The first years we were releasing us and our close friends for the most part. We still do that, but it has become more business minded than it used to be. We now have the irreplaceable Falko listening to all of the incoming demos and sending us what he thinks we might want to release. The start of Monaberry was definitely a lot of fun, but I think that this is just a good and natural development that both Monaberry and we have gone through, says Feliks.

It is not just the sound and business side of things that has changed pace for the super duo. I learn more as the old friends continue to play verbal ping pong across the table.

If you have a look at Super Flu’s event page on RA, you can conclude that the duo travels more in a month than most state leaders do over the cause of a year. Taking their sound everywhere from Poland to Peru, going deep south to New Zealand and all the way north to Iceland. With a travel schedule that should put the duo on some sort of government watchlist, I am happy that Feliks picks up the topic before I have to ask.

– We actually came here by car today. Whenever we can, we try to avoid airports. When you travel as much as we do, airport, layovers, delays and cancelled flights start to become an annoying part of your life. On a good week we have gigs Thursday through Sunday and at a certain point, every airport starts to look the same and it can just drain your energy completely. When ever we can, we will travel by car or train. It might take a little bit longer to get there, but I arrive in a better state of mind, Feliks explains.

Before I have a chance to follow up, Mathias interjects and rounds of the topic very nicely.

– Yeah, airports will really get to you eventually. We are very privileged to do what we are doing, but there is always things we can optimise. When we go to Stockholm tomorrow, I will go by train and have time to work and maybe even sleep a little before yet another night in the booth. I can certainly feel that I am not 30 anymore. 12 years ago I could party my way through a weekend of gigs, but now I would be absolutely beat and not worth anything for my family the following week. But small changes like not drinking anymore, going to the gym and eating mainly plant based has worked out really well for me, says Mathias.

The pleasant, butterfly wearing waiter interrupts to serve Mathias his cup of krauter tee. As the cup fills and there is a short break in conversation and I can look at my notes and pick up a topic that I have been dying to talk to Super Flu about. 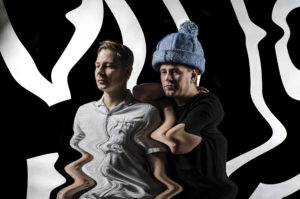 One might think that a headline like that would refer to ingesting critical amounts of the unofficial national product of Columbia. But as you might have picked up by now, Feliks and Mathias leaves no room for predictability. Riding the white dragon refers to a picture on the vinyl edition of their second album. So, how did they end up naked on the back of Falcor from Neverending Story? I’ll let Mathias take it from here.

– We wanted some sort of extraordinary picture for this album and we had a lot of ideas. We knew that there was a life size model of Falcor from Neverending Story as part of a movie studio tour in Munich. When we had a gig there we arrived a day early and went on that tour. We came to the hangar where Falcor was and now it was time to get our shot. So, we made sure to quietly disappear from the rest of the tour and hide in a dark corner. Like planned the tour moved on without us. So we got naked in a hurry and got on the back of Falkor. Falko Gerlinghof, who works with us at Monaberry, was there with a camera to capture this lovely moment. We never heard anything from the studio about it, so it was the perfect “crime”, says Mathias.

There is no doubt that when Feliks and Mathias get an idea, they will act upon it and spin it in a direction that only these two heads put together could. Therefore there is nothing more natural than asking how they ended up on their artist name Super Flu.

You have to imagine it

As you might have guessed from the headline of this article, Super Flu is an abbreviation for Super Foreskin Leather Uniform. Naturally my question was: Why? To which the answer was short and precise:

– It does not exist, you have to image it, says Mathias without any kind of follow up.

In the aftermath of meeting this powerhouse of a duo, I must say that I find it as a perfect analogy for their music. There is no sound quite like the sound of the Super Foreskin Leather Uniform. There is no performance quite like the one the Super Flu puts on. After 15 year in the game they are in a class of their own. A class they have created themselves with hard work, curiosity, ingenuity, toy instruments, and classic orchestras. 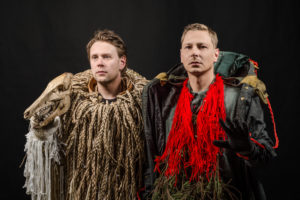 Besides from the synth and other studio hardware, the Super Flu sound have come from playing toy instruments and working with the Dortmunder and Mannheim Philharmonic. Once they even had a sound that they weren’t quite sure how to perfect, so they tried recording it through a phone call between two old school Nokia cellphones. Who thinks of doing this? I wonder how this duo works together.

– In regards to the music, I would say that Mathias thinks most in the direction of mood and what makes your hips move. I am more on the technical aspect of things. You know how to arrange our recording and bind our sounds together. I guess that Mathias is more of the DJ and I am more the producer, says Feliks and continues to talk about their work with the Dortmunder Philharmoniker:

– It was such a trip that they approached us for a collab and we said yes without any major consideration. Usually, it is just the two of us making decisions on what musical direction to take, so it is something else to work with a whole orchestra and the team behind them. When we would be recording and we want to make some changes to the sound, you can’t simply go talk to horn section and ask. You go to the director, who will then have a word with the conductor and then he will talk to the horn section. It might sound a bit troublesome, but there is something to the hierarchy created and how it functions. It was a fantastic experience both personally and professionally – we might even be planning on doing it again in the nearby future, says Feliks.

And with this beacon of hope of more Super Flu recordings with a philharmonic orchestra, I have to turn off my recorder and thank the guys for their time. I doubt that I have to get ready for fame like Mathias proclaimed, but who needs fame when you have an interesting conversation with two genuinely nice guys.

I have but one thing left to say. When ever Super Foreskin Leather Uniform is playing a club near you – take a ride on the white dragon and experience how Feliks and Mathias transforms 15 years of friendship into sound.