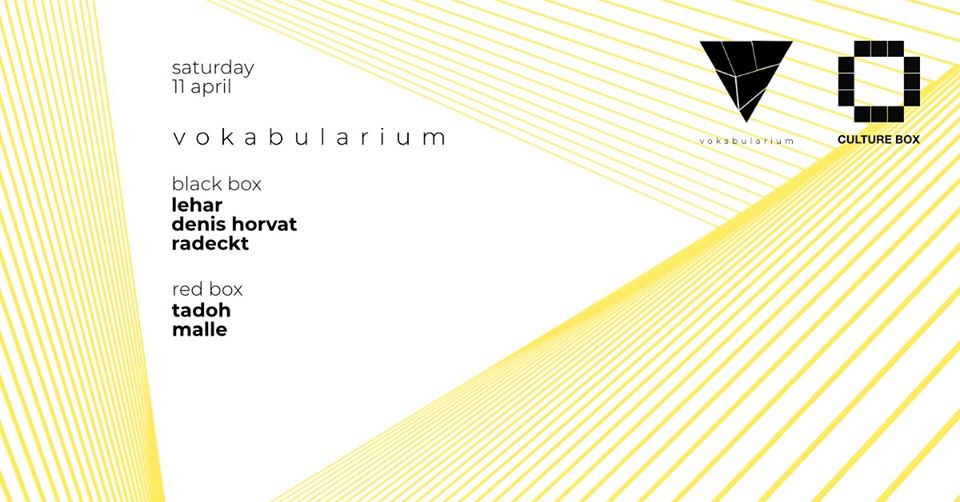 NB: Limited amount of early bird tickets on sale at only €11 until 1 March! After that, the price is €15.

We’re proud to present the first ever Vokabularium label night!

The new Vokabularium label is the brain child of the immensely talented producer and DJ Denis Horvat. For the past couple of years, Horvat’s career as a producer and DJ with a keen ear for melodic sounds has only moved in one direction: Up. Having previously released music on notable labels such as Innervisions and Afterlife, it seems only natural that his next step should be a label of his own making. To help celebrate this event, Horvat has invited Italian star Lehar to join him in Black Box. The producer and DJ whose resume includes well received releases on Diynamic Music and Connaisseur Recordings is known for creating music that entails a mixture of sounds and atmospheres of dramatic effects characterized by intimate basslines and intriguing melodies. Joining the team to turn the duo into a trio, Copenhagen based Radeckt, known for releases on Aeon and MoBlack Records amongst others, will give us a shot at his best tunes.

Meanwhile, tadoh of Folkets Haus will bring his signature slow vibes and deep sounds to Red Box alongside partner in crime, Malle.

Don’t forget to come by early for unlimited free Tuborg Gold. Available from all bars between 11pm and midnight.