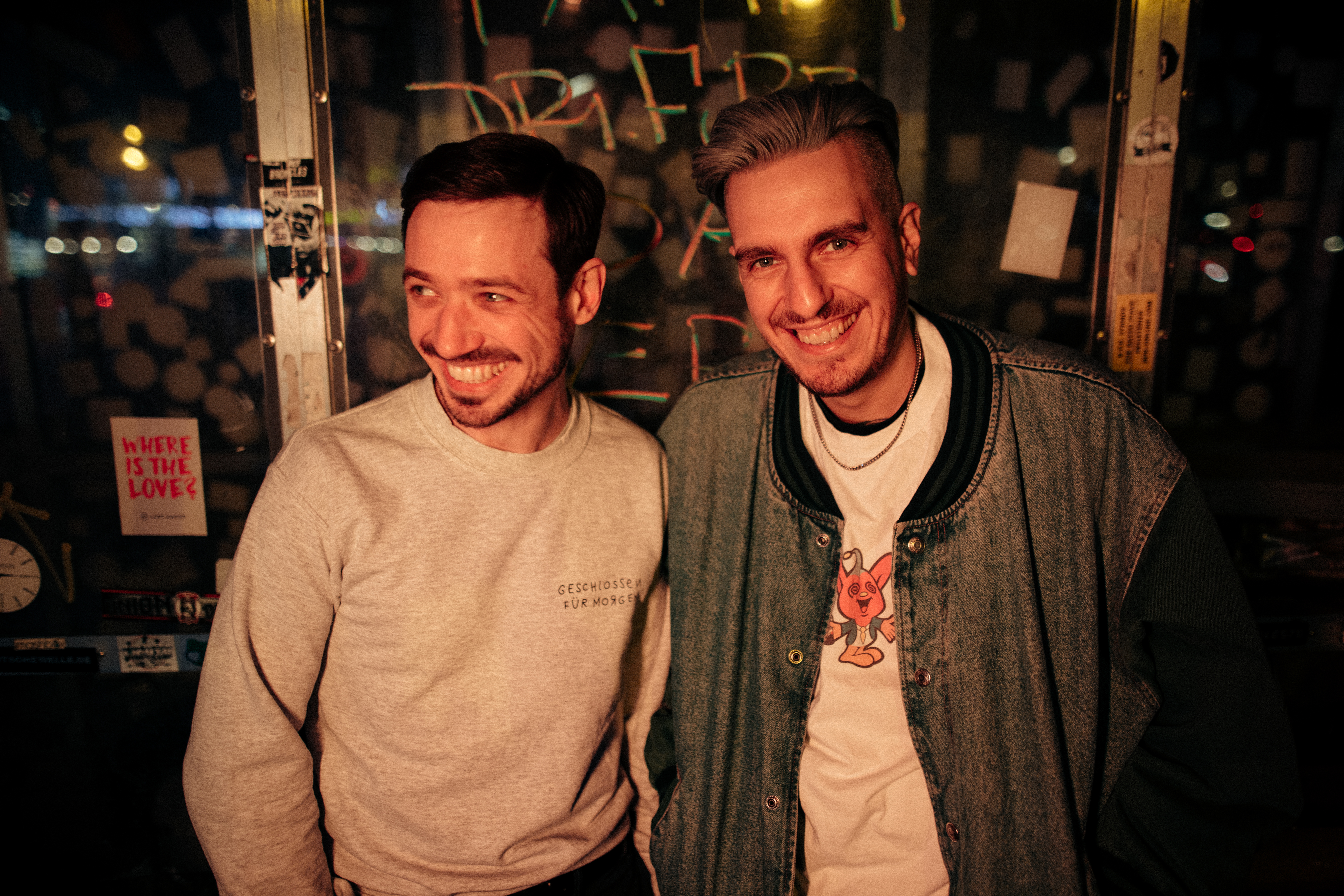 The unlikely partnership between Daniele Di Martino and Christoph Deckert have been six years underway since their first handshake. Daniele was SoMe guru for the label that Christoph’s band, Jennifer Rostock, was signed to. In the best of Berlin traditions they later met at different parties across the city and agreed to have some fun in the studio. Thus, a friendship slowly formed and it was a pleasure to talk to them on a Zoom connection. Yes, Zoom meetings can actually be fun.

Join us for a talk about finding the right family, their upcoming EP release, unpaid sponsorship, and what direction Berlin is heading in right now. Ohh yeah, Christoph was kind enough to provide us an exclusive mix for our Unnamed Sessions:

In case that you are not so entrenched in the techno and Berlin underground that you sweat ketamine and expect people to wear black lace before you let them into your studio apartment, let me present the interview victims for you:

Hailing from Essen, Christoph Deckert is a graphic designer who has been punishing bass guitars in several punk bands. Under the alias Deckert he switched to the more electronic side of music four years ago. He is part of Deorbiting and has his name on more releases then I can count – often collabs. A multi talented musician with releases on Connected, MoBlack and URSL to mention a few.

The German/Italian hybrid Daniele di Martino grew up in the south of Germany. He picked up the cello at 4 years of age and music has lived in him since. Now residing in Berlin he is a DJ, producer and runs the label Mono.Noise. Electronic music has been Daniele’s passion since 2011 and Stil Vor Talent, Katermukke plus Bar 25 has all put his name on their bracket. During lockdown he spent his time finishing a bachelor’s degree in sound engineering. Also, a boat builder and licensed ocean captain. Not important to the interview, just so rarely I talk to boat builders. 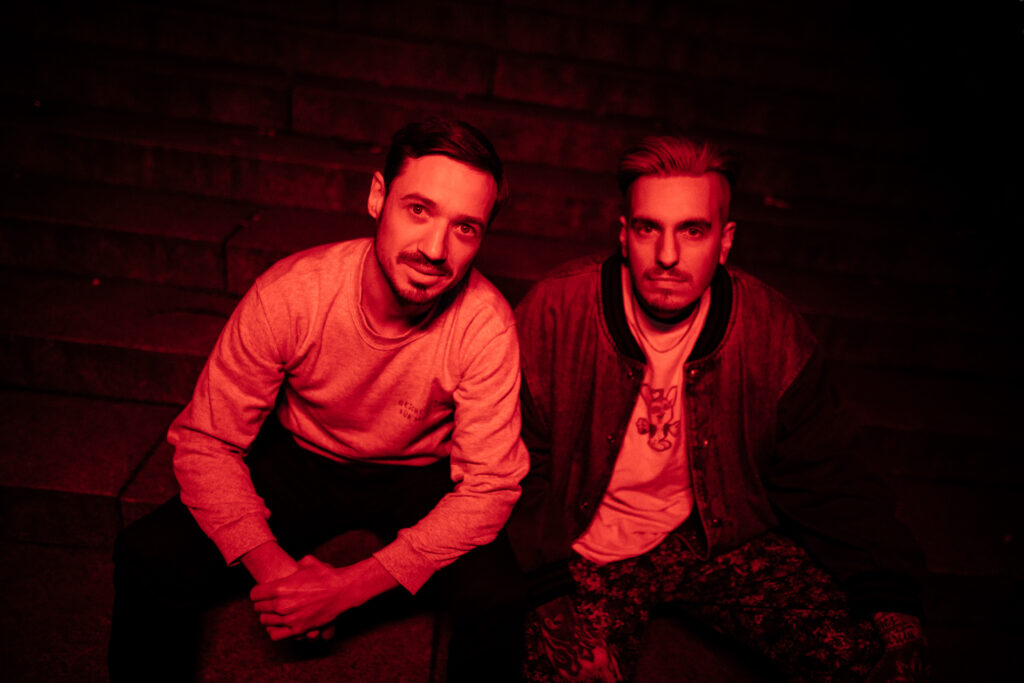 It was almost natural that Daniele and Christoph found each other and connected through music. Dropping into a conversation between friends can be weird. This was welcoming and including – something you should strive for in this business according to Christoph.

– Honestly, there is one golden rule when it comes to collaboration in this business. Don’t work with assholes. It’s actually that simple. Building a good family in this community is just super important. You are relaxed and in your best position to be creative when you can be yourself around people. We have a big scene, but at the same time connection is key to getting anywhere. Luckily the internet has made it that much easier to connect despite borders and time zones, tells Christoph.

Seeing as both Daniele and Christoph have released on some of the most hyped labels in the business, why turn their eyes and attention towards Denmark and Blindfold Recordings for this release?

– There is not one reason for choosing Blindfold for this release. They were quick to react. It was only two days after I sent the demo till we had an agreement for an EP release. Blindfold also has beautiful cover art. It sounds like a small thing, but the visual representation is super important. But most importantly, we felt a connection and got honest feedback. It is so nice to be able to connect with likeminded people through messenger and actually make things happen. If you pick your chosen family carefully it will pay off, says Daniele.

Let’s hear some more about that release then.

–  I love that music is a relaxed discipline with Christoph. You brought the bass and it was an intense jam session with some Störtebeker. We were just having fun and the tunes came naturally. It was the same thing when we were doing the tracks that became the Wezen EP that is now released on Blindfold, says Daniele.

– Yeah, that is about the same that comes to mind for me. It’s a pleasure to work with somebody when you find that deeper connection. It also worked out because our different skills complemented the other well. By the way, do you think that if we mention Störtebeker enough times in this interview that we could get them as a sponsor? To be fair, they played their part in the production process, laughs Christoph.

Well, let’s see if Störtebeker likes unsolicited PR from the house scene. Störtebeker Craft Beers, unwilling proud sponsor of this interview. Damn, that’s refreshing! But before we drown in tasty Störtebeker beer, what can we expect from the Wezen EP?

– It will be three original tracks from our hands. No remixes. We had a really good time producing and I hope it shows. I often get told that I have a very specific sound, but I really don’t hear it. Just put it on and see if you like it, says Daniele and is quickly followed by Christoph:

– One of the things I have really liked about the lock down is that people are not producing for dance floors right now. And it’s the same for us. You go into the studio with a different mindset than before. It is beautiful to be able to take down the pace a bit and go more for melody rather than bpm’s, ads Christoph.

And speaking of lock down. Where do Daniele and Christoph see Berlin’s world famous club culture heading these days?

Berlin at a crossroad

– I guess, Berlin is changing a lot. A few weeks ago, the neighbors across the street were having a party. Windows open, techno blasting and a guy using the American flag as a cape while going around the party and presenting white lines on a phone to the guests. Because … Berlin. Eventually the police came to close it down. It was so surreal to watch as this piece of modern Berlin theater plays out before me, tells Christoph.

– Yeah that used to be just a regular event in Berlin. The city has been in hibernation for a year now, but already before the lock down gentrification was taking a toll on the city. Nobody with a sane mind would open a club in Mitte. The prices are through the roof and so many clubs are having their rent raised to a ridiculous level. Griessmühle closed down already before the corona hit us and now they will reopen, but the new location is so far out from the centre. I know they will be popular once they open their new doors, but in my mind it feels like a day’s travel to get there, says Daniele.

Corona has definitely hit Berlin hard and it comes on top of gentrification already putting pressure on the city. Are we looking at the same thing that happened in London? The creatives and artists will slowly be pushed further out of the city and nothing but hedge funds can afford central Berlin?

– Gentrification is here to stay. No doubt about that. Sure it is still a cheap city to live, eat and drink in, compared to you guys in Copenhagen, but the paychecks are also quite a bit lower. It almost feels like a hostile hedge fund and tourist take over of the city. Clubs, that for many people are a big part of the attraction to the city, are being forced to move to the outskirts and that there is room for more hotels, offices and banks. I guess this development is natural, but this used to be one of the most left oriented cities in the world – that seems to be a thing of the past, says Daniele with a distant look in his eyes.

– My guess is that Berlin as we know it will always live in one form or another. It’s just not gonna be as central as it used to be. I loved Berlin when I moved here. I still do, but I am no longer sure that I am gonna stay here forever. Honestly, I think that Berlin has moved so far away from the left that the plague rave DJs who have been playing in Tulum and Tanzania during corona aren’t even gonna get punished. Six months and everybody will have forgotten that shit, says Christoph.

Heading out to sea

Honestly, I could have talked to Daniele and Christoph for hours, but all good things must come to an end. Like the world as we know it.

– It is really nice to know a boat builder and licensed captain. When the zombie apocalypse inevitably comes, we can just hop on a boat, head out to the sea and just leave the world behind with a cargo full of Störtebeker, laughs Christoph.